In Indian Culture Why do we worship Kalasha? 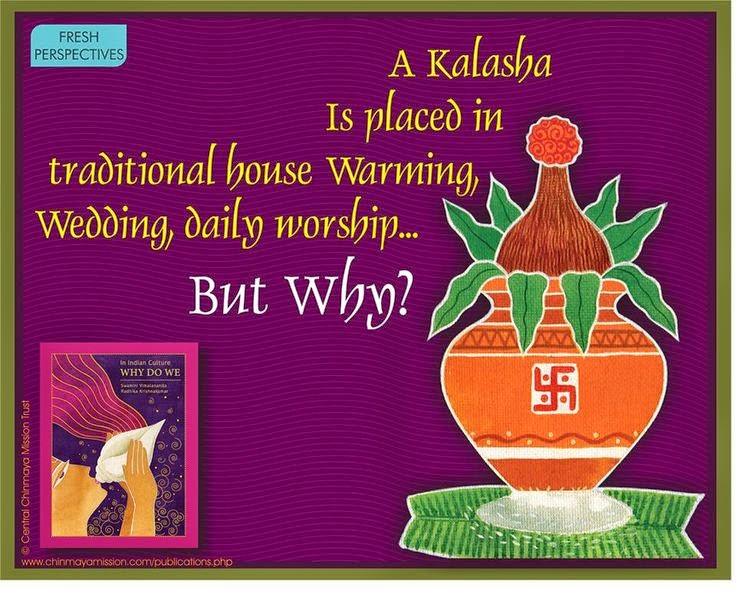 First of all what is kalasha?

A brass, mud or copper pot is filled with water.  Mango leaves are placed in the mouth of the pot and a coconut is placed over it.  A red or white thread is tied around its neck or sometimes all around it in a intricate diamond-shaped pattern.  A pot may be decorated with designs.  Such a pot is known as kalasha. 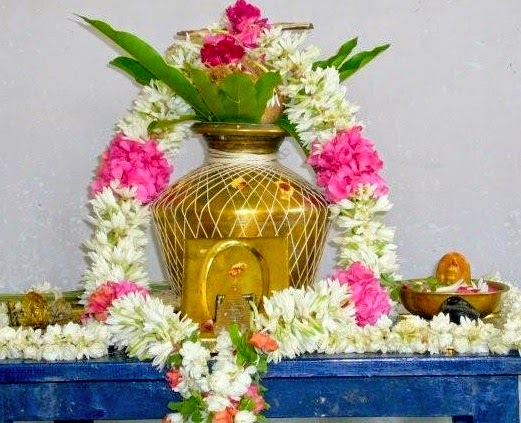 When the pot is filled with water or rice, it is known as purnakumbha representing the inert body which when filled with the divine life force gains the power to do all the wonderful things that makes life what it is.

A kalasha is placed with due rituals on all-important occasions like the traditional house warming (grahapravesa), wedding, daily worship etc.  It is placed near the entrance as a sign of welcome.  It is also used in a traditional manner while receiving holy personages. 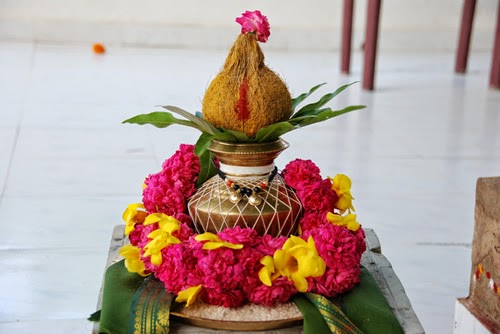 Why do we worship the kalasha?

Before the creation came into being, Lord Vishnu was reclining on His snake-bed in the milky ocean From His navel emerged a lotus from which appeared Lord Brahma, the creator, who thereafter created the world.

The water in the kalasha symbolizes the primordial water from which the entire creation emerged.  It is the giver of life to all and has the potential of creating innumerable names and forms, the inert objects and the sentient beings and all that is auspicious in the world from the energy behind the universe.  The leaves and coconut represent creation. 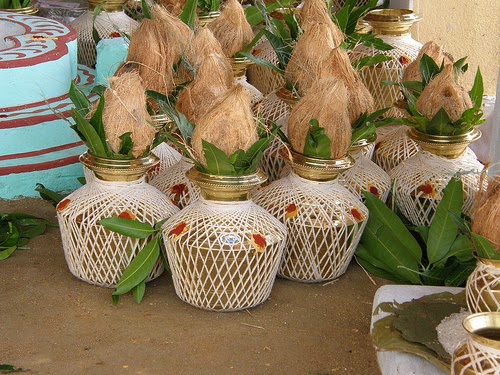 The thread represents the love that "binds" all in creation.  The kalasha is therefore considered auspicious and worshipped.  The waters from all the holy river, the knowledge of all the Vedas and the blessings of all the deities are invoked in the kalasha and its water is thereafter used for all the rituals, including the abhisheka. 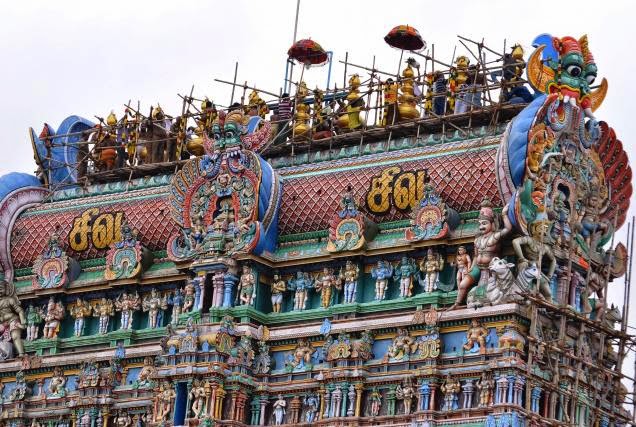 The consecration (kumbhabhisheka) of a temple is done in a grand manner with elaborate rituals including the puring of one or more kalashas of holy water on the top of the temple.  When the asuras and devas churned the milky ocean, the Lord appeared bearing the pot of nectar, which blessed one with everlasting life. 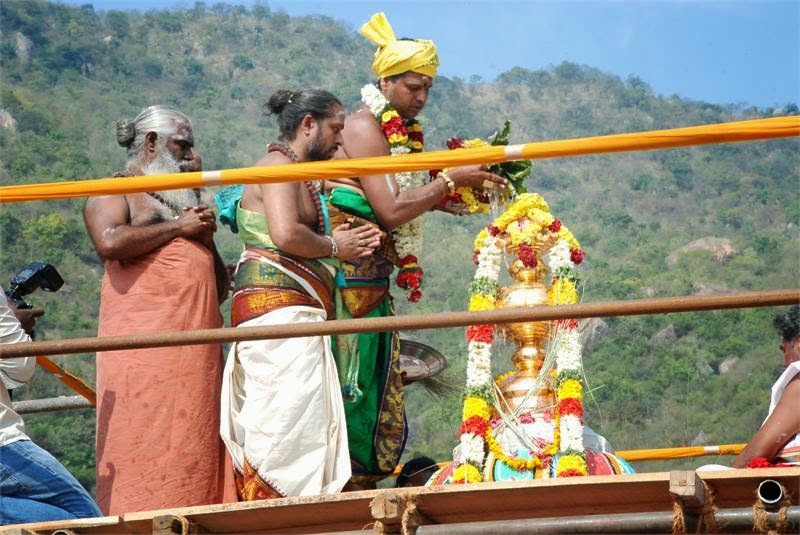 Thus the kalasha also symbolizes immortality.  Men of wisdom are full and complete as they identify with the Truth (poornatvam).  They brim with joy and love and respect all that is auspicious.  We greet them with a purnakumbha ("full pot") acknowledging their greatness and as a sign of respectful and reverential welcome, with a "full heart". 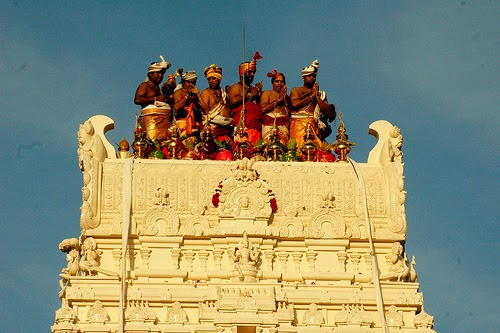 Email ThisBlogThis!Share to TwitterShare to FacebookShare to Pinterest
Labels: Symbolism of Hindu Gods and Rituals, Why do we

In Indian Culture Why do we welcome Guests? 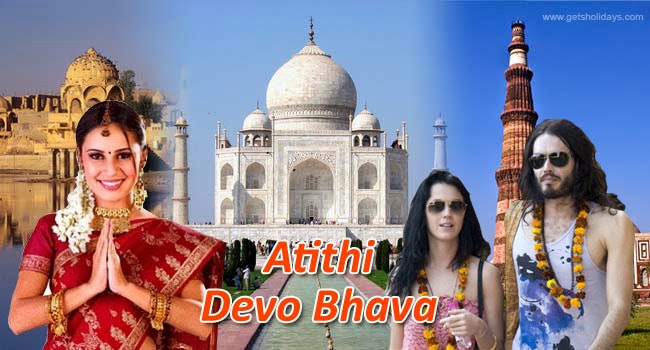 In Indian Culture
Why do we welcome Guests?

Welcoming a guest is as much an expression of man's cultural sensitivities as his world-view.  Hence, each culture has its own way of welcoming a guest.  In Indian custom, it has been said that one should look upon a Guest as God verily.  It is based on the dictum given in Taittiriyo Upanishad (1.20 -- Atithi Devo Bhava, "May the Atithi (guest) be God unto you." 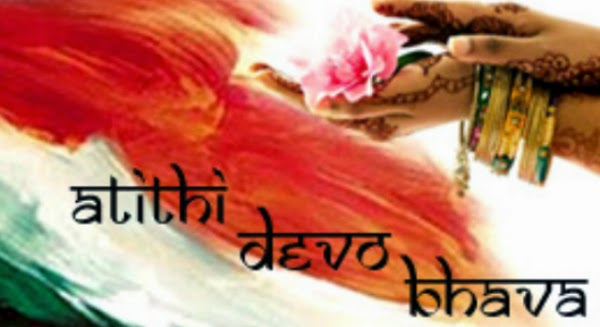 "Tithi" in Sanskrit or even in Hindi language means a (calendrical) date.  "A-tithi" means who does not have any date.  The term Atithi means 'one who comes without a date' or prior intimation (a-tithi, without a date).  But, now the word Atithi is extended to mean all guests, whether they come with intimation or without it.  And treating an Atithi with respect is a part of Indian way of life.


In olden days, there were no fast modes of communication as compared to today and thus if anyone wants to visit or meet his near and dear ones, there were no ways he could communicate his arrival.  So he used to pay visit without any information and therefore in course of time guest used to be called "athithi" one who does not have fixed time of arrival.  "Devo" in Sanskrit means God-like and "bhava" means to assume/understand.  Atithi Devo Bhava means to assume or understand a guest as god-like and so respect and homage in the similar way one would give to his God. 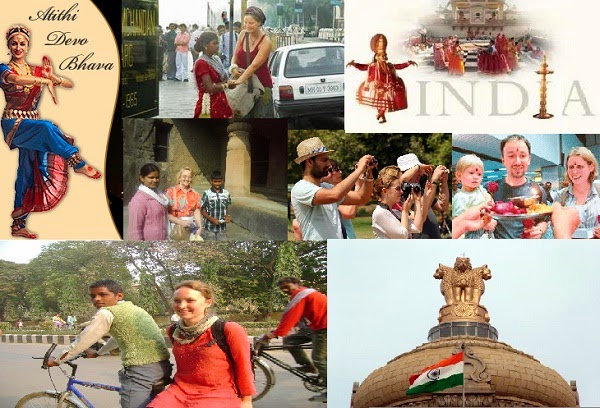 The Indian tradition of welcoming the guest as God has stayed alive despite countless changes India has gone through.  Keeping the dictum atithi devo bhava in view, there are various ways of welcoming a guest in Indian household and social gatherings.  Generally welcoming consists of, besides exchange of pleasantries, offering the guest a seat, greeting him with a namaste or pranamm, offering him something to eat or drink and seeking him off when he is leaving. 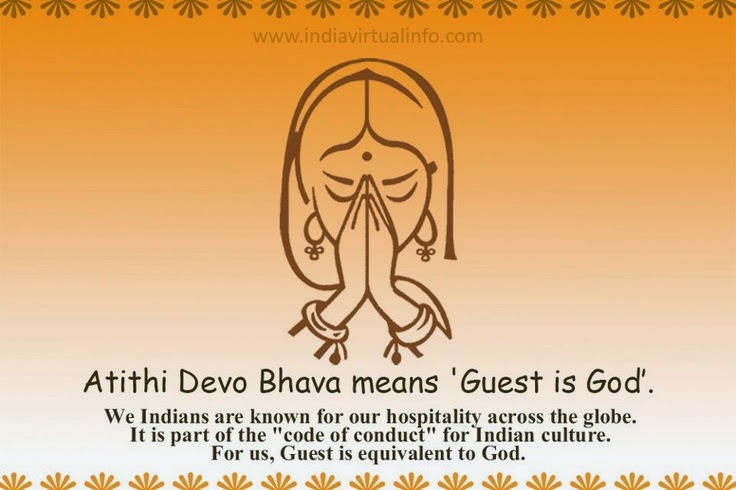 In a more specific sense, a guest was traditionally offered various items called upacharas.  There is much variance in the way these and other upacharas are offered.

Once a guest is assumed to be God-like, then comes the process he should be treated.  As the God is treated with reverence and respect and there are proper ways to show that respect, those ways are called "rituals".  Similarly, the guest should also be shown the respect through the same rituals.  In Hinduism, these rituals comprise of five-steps which is known as Panchopchara Puja.  These five rituals from the worship similarly become the five "code of conduct" to be followed while receiving guests which are as follows:

Salient features of Welcoming a Guest

Some of the salient features of welcoming a guest are:


In many areas, especially villages and small town, a respected guest is first given water to wash feet.  For monks, the head of the household, pours waters on the feet of visiting monk.  Water cleansing is considered a holy act of cleansing and offering respect.


A flower not only symbolizes freshness but is also a gesture of goodwill.  It symbolizes the sweet and enduring memories of the visit between the host and the guest that stay with them for several days.  Offering fresh fragrant flowers or flower garlands (malas or haras) is part of welcome.  It is a gesture of good will and honour.

Lighted earthen lamp looks beautiful, fire is considered pious and also a source of light which disperses light so that everything between guest and the host is clearly visible. 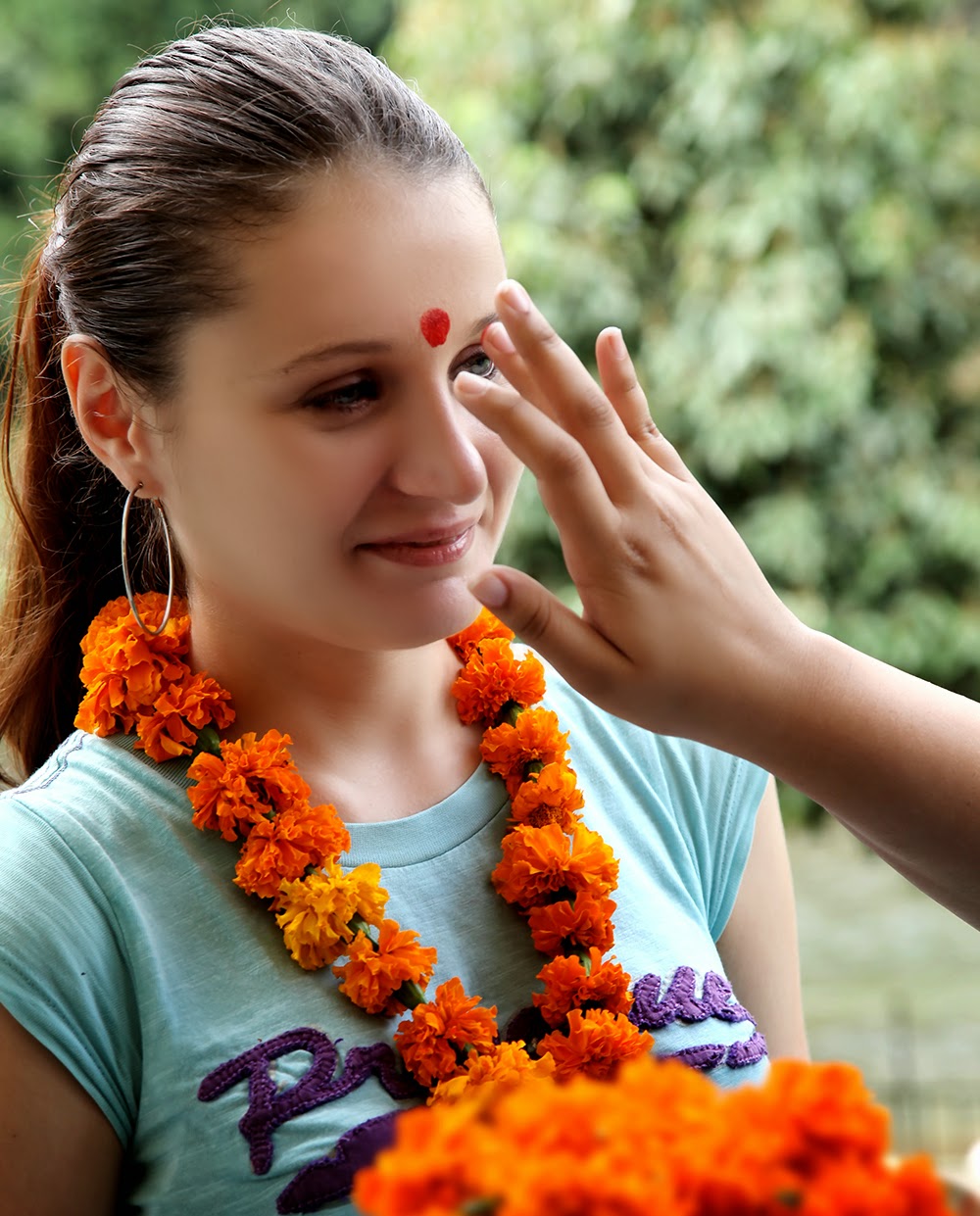 
Tilak is considered not only a symbol of warm wishes but also an expectation of well-being of the person on whom it is applied.  A symbol unity and auspiciousness, a Tilak, of vermilion or sandal past, along with some rice grains, is put on the forehead.  This is the highest form of welcome in Hindu families. 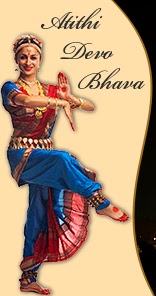 
Offering water to the guest is very important part of welcome.  This may be connected to the tropical weather and sweating which makes frequent drinking of water a necessity.  Then, fruits and sweets were offered to guests.  These days it is common to offer a cup of coffee or tea or aerated drinks as well as some snacks.  Full meal (dinner or lunch) is served if the guest stays longer.

One finds these and other forms of welcoming the guests mentioned in Indian religious books such as Mahabharata, Ramayana and many Smritis.  The important thing to note is that the tradition has continued to exist though some forms and terms have changed.