Image 1 looks like a family photograph: father, mother and two sons.  But this is no normal portrait.  This is the image of a God called Shiva, a mountain mendicant, his wife, the Goddess Parvati, who is a mountain princes, and their two children, Ganesha, who has the head of an elephant, and Kartikeya, who holds a spear.


One day, when this family was sitting together, they were paid a visit by a sage called Narad, who loved to stir trouble wherever he went. 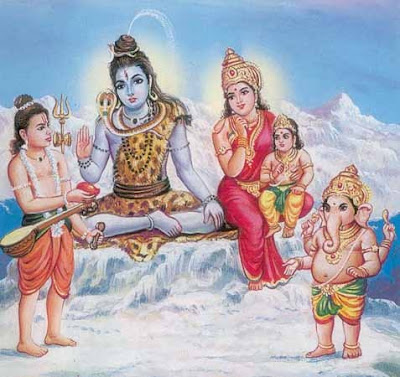 'How can I decide which one is better?' asked Shiva, turning to to his wife, Parvati.


'Let them go on a race,' said Parvati.  'He who first goes around the world thrice shall get the mango.'


Kartikeya, shown in Image 2 immediately mounted his peacock and rose to the sky, determined to be the first to go around the world thrice.  Ganesha, however, did not  move.  He continued to sit beside his parents, playing with his rat.  Kartikeya went around the world once, then twice, wondering what Ganesha was up to.  Ganesha still showed no signs of moving.  As Kartikeya was about to complete his third and final round, ganesha got up, and as shown in Image 3, quickly ran around his parents thrice and declared, 'I have won!. 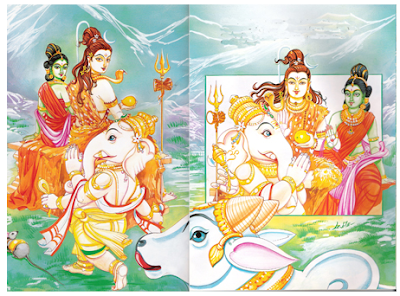 For Kartikeya the measurable rational logical world mattered more than the unmeasurable emotional world that mattered to Ganesha.  There are two aspects of Life.  Narada gave the mango to Ganesha.  Kartikeya did not agree with this decision, and moved to South.

Every culture views the world through different lenses.  For some, there is one formless divine; for others, the divine has many forms.  Who is right?  For some, there is only one life with no rebirth; for others, this is just one of many lives.  Who is right?  Answers to these questions are never universal.  They are cultural.  They spawn beliefs.  From beliefs comes behavior that can make us either less tolerant or more accommodating.  That is why my world does matter. 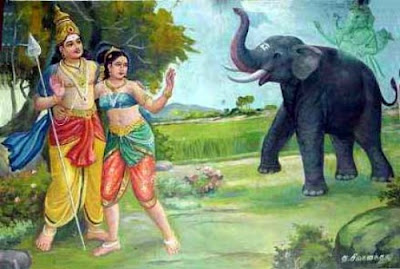 
Kartikeya, the brother of Ganesha is also known as Muruga, especially in Tamil Nadu.  He lives in the mountains of Tamil Nadu and in one of the valleys, in the middle of a millet field, he saw a beautiful tribal girl called Valli.  He fell in love with her but no matter how hard he tried she refused to respond to his attentions. 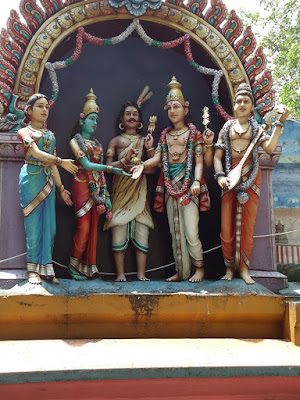 So finally he prayed to his brother, Ganesha, who took the form of a wild elephant and stormed into the millet field frightening Valli who ran into the arms of the handsome-god Muruga.  Muruga immediately offered protection to Valli and drove the elephant away much to her delight.  Thus with the help of his brother, Muruga was finally able to get the girl of his dreams. 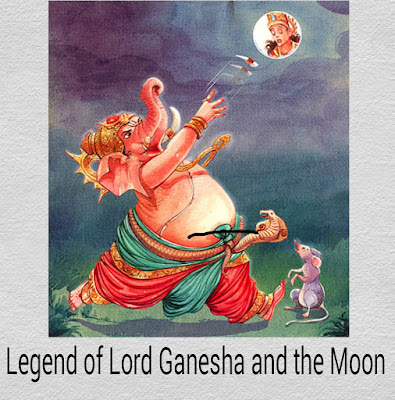 One day Lord Ganesha was travelling happily through the world on his vehicle, the rat.  He had eaten lots and lots of Modakas [his favourite sweet, made up of rice flour, buts, jaggery and coconut.]  His stomach was full and he was enjoying the ride.  Suddenly the rat saw a snake and stumbled. 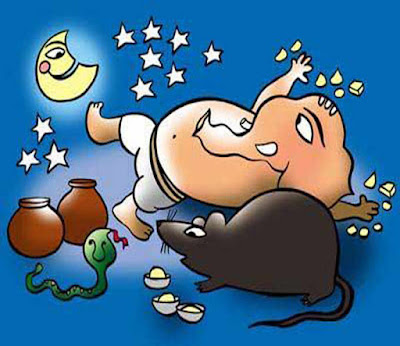 In the gust of anger and frustration he caught the snake that caused his rat to stumble and tied it around his belly.  Seeing this sight, the moon started laughing and made fun of Lord Ganesha's big belly.  The otherwise calm and cool Ganesha became furious and pulled out one of his tusks and threw it towards the moon with great force.

Lord Ganesha cursed the moon and said that.  Your beauty is the cause of your arrogance and now your beauty will become the cause of your suffering.  Whoever sees you on the fourth day of Bhaadrapada month i.e., Ganesh chaturthi [the birthday of Lord Ganesha]  would receive bad repute and suffer bad luck.  That is why no one looks at the moon on Ganesh Chaturthi. 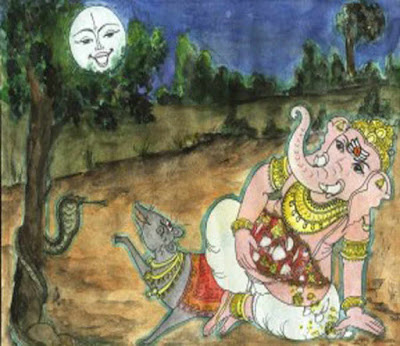 Lisening to this curse the moon realized his mistake and begged for forgiveness.  Lord Ganesha calmed down and told the moon that the curse cannot be taken back. 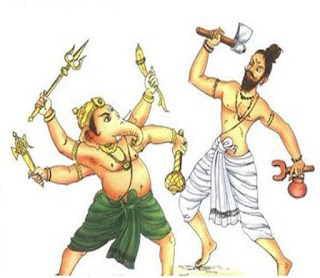 Whenever there are problems on earth, Lord Vishnu descends from his heaven, Vaikuntha, and takes an appropriate animal or human form to set things right.  The sixth such form of Lord Vishnu is that of Parashurama who killed many unrighteous kings with his axe.

According to Brahmananda Purna and Brahmavaivarata Purana, towards the end of his stay on earth, Parashurama decided to give his blood soaked axe to Shiva.  Ganesha stood guard at the foothills of Mount Kailas and would not let Parashurama in until he introduced himself.  But Parashurama was in too much of a hurry to do so.  So he pushed Ganesha away.  Ganesha refused to budge.  Irritated, Parashurama swung his axe and struck one of Ganesha's tusks. 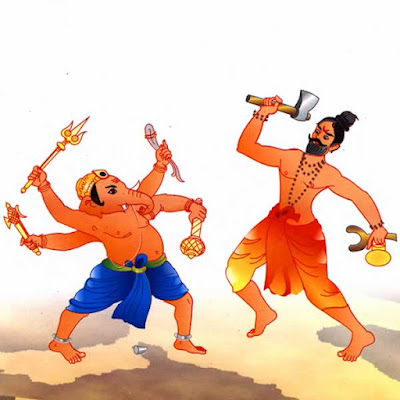 That is how it is said to have broken.  Ganesh's mother, Parvati was so angry when she saw this that she transformed into Durga, the fierce warrior goddess, and challenged Parashurama to a duel.  Parashurama realized he had acted harshly and apologized to the goddess.  She calmed down, but on condition that Parashurama give up his axe.  Parashurama did as instructed and gave the axe to Ganesha in whose hand it can still be seen in images today.  With the axe gonbe, Parashurama was no longer the angry warrior priest.  He became a sage and meditated on the foothills of Mount Kailas. 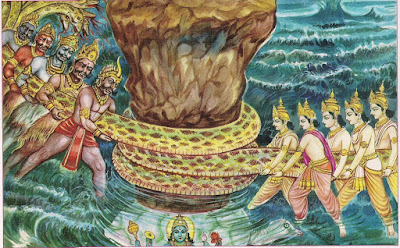 The gods once churned the ocean of milk for the nectar of immortality known as amrita. However, they forgot to propitiate Ganesha before this undertaking.  To teach them a lesson, Ganesha caused the serpent-king Vasugi who was being used as the churning rope to vomit venom. As the gods choked on the poison, they invoked Ganesha and begged him to remove this obstacle to their success.  Pleased with their worship, Ganesha requested his father Shiva to drink and digest the poison, thus clearing the air and enabling the gods to continue churning until the pot of elixir emerged from the ocean.

Ganesha name is chanted before any activity is started.  Those who forget to do so, do so at their own peril.