Haridwar, population 1,90,000, 225 kilometers northeast of Delhi, is easily reached by bus from New Delhi or Shukratal.  Or, if visiting Vrindavana, you can get an overnight bus straight from Vrindavana to Haridwar.

"Haridwar" means the door to Hari, the Supreme Lord Sri Vishnu.  It is also known as Hardwar for its relation to Lord Shiva.  It sits on the banks of Ganga River, known as Mother Ganga.  Many years ago it used to be called Kapilsthan beause Kapila Muni had lived, meditated and performed penance here.  Hardiwar is also known for being where the Ganges leaves the mountains and enters the plains.  This is the reason Haridwar also has the name of Ganga-dwara.

It is one of the major holy places of India and has plenty of spiritual significance.  This is where Vidura was instructed by Maitreya,  Daksha performed his great sacrifice near Kankhal, which was attended by all the great demigods.  It is about four kilometers south of the railway station.  The Dakeswara (or Dakshaprajapati) Mahadeva Shiva temple at Kankhal, the oldest temple in Haridwar, marks the place and commemorates Lord Shiva coming to help his wife, Sati.  The contemporary temple was built in 1962.  The central image in the temple is a Shiva Linga,  The little pit in the Daksha Mahadeva Mandir is said to be where Daksha had his original sacrificial fire. 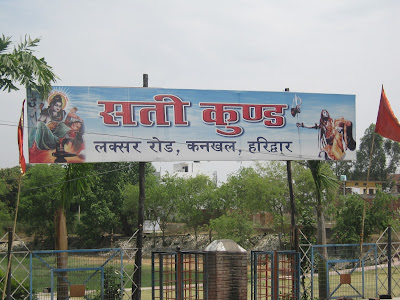 Sati Kund, on Kankhal Jwalpur Road is one of the oldest of the significant places in Haridwar and marks the spot where Sati (Durga) left her body and where she burned herself after being insulted by her father, all of which is described in the Srimad Bhagawatam.  Lord Nityananda also stopped here on His tour 500 years go.  However, the kund is in the middle of nowhere on the road and not developed in any way.  It is overgrown with greenery and water lilies and can easily be overlooked. 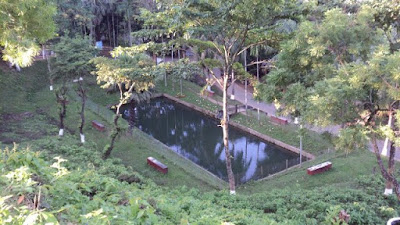 To explain the legend in brief, Durga's father Daksha, son of Brahma, did not like Durga's husband, Shiva.  So when Daksha had his huge ritual, he did not want Shiva to be there.  When Daksha had entered the arena, all sages stood in respect except Brahma and Shiva, which offended Daksha.  So Daksha cursed Shiva to not partake in the rituals.  Thereafter, Daksha and Shiva both left the arena.

Afterwards, Daksha did not invite Shiva to the ritual, but Durga still wanted to go, even against the advice of Shiva.  After arriving, she underwent insults by her father, Daksha, toward her because of being married to Shiva.  So she self-immolated herself in fire, thus committing Sati.  After Shiva heard about this, he became extremely angry and created a sent a huge black demon, Virabhadra, and his followers to fight and destroy Daksha's ritual.  He also cut off Daksha's head and threw it into the fire. When Shiva came and gathered Sati's body, he was grief stricken and carried her body wherever he went.  To relieve Shiva's grief, Lord Vishnu cut Sati's body into pieces with His chakra and wherever they dropped became Shati-peeths, or places of power where people go to worship Shakti, or Durga. The Daksh Mahadeva Mandir is said to mark the place where the fire of Daksha's Vedic ritual was located.

Haridwar is known for its many temples, more of which are always being built.  One popular temple is the Manasa Devi temple, another form of Durga, located on the hill above the city.  You can walk up the hill or take a cable car which gives you a way to get a great view of the city and mountains and plains that surround it.  The deity in the temple is small, but the temple is organized and often crowded.

Other holy temples in Hardiwar include the Chandi Devi, Hanuman and temple to Hanuman's mother, Anjani Devi, on top of the Siwalik Hills about four-and-a-half kilomters away, an south of the river.  You can easily see it from the Ganga.  You can also reach this hill top temple by means of a cable car.

Also, the Narayana-shila, Bhairava, and the Mayadevi temple is one of the oldest in Haridwar.  The Mayadevi deity is a three-headed, four-armed female in the act of killing a prostrated demon.  Other temples in Haridwar include the Shraannath Mahadeva temple is where Parvati performed austerities to get Lord Shia as her husband.  She ate only leaves of the Bilva trees, which are still respectd here for the part they played in this pastime.  Not far away is a temple marking the place where the Ganges originally appeared in order to supply water for Parvati to drink. 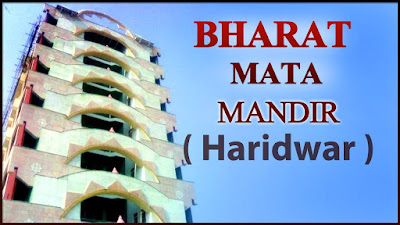 Another more modern temple in Haridwar is the Bharata Mata (Mother India) Mandir.  It was consecrated in 1983 and stands eight stories tall.  The first floor contains a standing image of Bharata Mata and a map of India on a raised platform.  The second floor contains the Shrine of Heroes, dedicated to those who were active in India's independence movement, such as Bhagat Singh and Shivaji.  The third floor is dedicated to great women of India's legends and recent history.  The fourth floor is the shrine of Indian saints from various religions.  The fifth floor is the assembly hall.  The sixth floor contains the Shakti Shrine with various images of the goddess.  The seventh floor is dedicated to Lord Vishnu with many examples of His forms.  And the eighth floor is the Shiva Shrine  with many images of Shiva and various gods and goddesses associated with him.

This temple is located along a road in the eastern part of Hardiwar.  The Road has numerous temples that one can visit, several of which have diorama displays which are quite popular with the pilgrims.  There is one that is a replica on the VAishno Devi temple and has a route that you take in which you must cross water, crawl through caves and narrow passages before you finally reach the sanctum.  Visiting it is said to equal the same merit as going to the real Vaishno Devi temple in Jammu. There is also a temple of mirrors nearby which has many deities with mirrors thrones and Krishna and Arjuna on a chariot with horses, all made of colored mirrors.


One of the holiest places in Haridwar is Har-ki-Pauri, where all pilgrims come to bathe in the water of the Ganga River.  Some people believe that this is the location where the celestial waters of the Ganga flow into the river.  Therefore, the river is known as the Ganga from this spot onwards.


As the pilgrims bathe, they may hang onto chains or rails in the wall to stable themselves in the swift current. If they get carried away by water, there are also chains hanging from the bridge which they can try to grasp.  Otherwise, the water, especially if it is high, can take them downstream a ways before they can reach a point of getting out of the river.  The pilgrims come here first to bathe before going on northern pilgrim tour of Char Dhama, the four major places farther north. 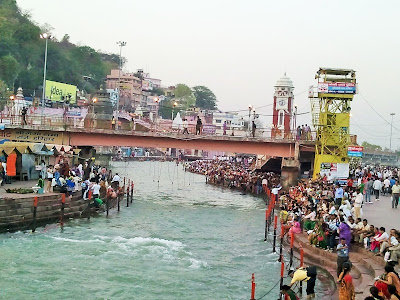 The Ganges at Har-ki-Pauri is actually a canal that channels the water to the side of the city.  The main branch of the river is very little ways away.  Imprints of Lord Vishnu's foot prints are found on a wall under the water here at Har-ki-Pauri.  One of the priests can help you find them.  There are many little shrines and temples here for Ganga Devi, Haricharan, Vishnu, Shiva, Parvati, and others. 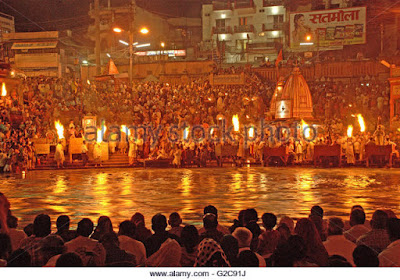 Every evening around 6.30 p.m. you can see the arati ceremony to the Ganga as the priests offer large ghee lamps to the river while kirtan music goes on with banging hand cymbals and gongs.  This is a major event and lots of people turn out to see it.  It creates a festive atmosphere every night. Many pilgrims and sadhus ro holy men attend to this.  So get your seat at least a couple hours before it starts, or they may also close the bridge to pedestrians so you can't cross.

You can also pay a priest a small sum to assist you in doing your own puja or worship to Mother Ganga.  He will gather items and then conduct the ritual while telling you what parts of the prayers and mantras to repeat, as you offer flowers and a ghee lamp or a small leaf boat with flowers and lamp to the Ganga.  You can see many pilgrims do this, and some of these small leaf boats can be quite fancy.  It is considered most beneficial to do this, especially if you are continuing up into the mountains to see other holy places along the Ganga.

The southern end of this ghat is where people pour ashes of their deceased ancestors into the Ganges so their existence becomes purified.

The most auspicious days to bathe here are the full and new moon days, plus Ekadasis, all solar and lunar eclipses, and the full moon during Kartika (October/November).  The first day of Vaisaka (April/May) is also important because this is said to be the date when the Ganges first appeared here, and it also marks the beginning of the Hindu solar year. 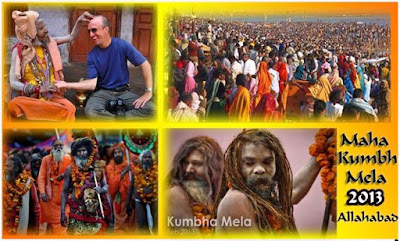 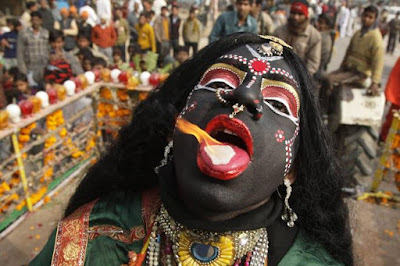 The Kumbha Mela is a month-long festival that is very important and marks one of the most auspicious times to bathe here.  It is held at Haridwar every twelve years when the planet Jupiter is in Aquarius and the Sun enters Aries.  This festival is, indeed, timeless and dates back thousands of years. A previous festival was in April/May of 1998.  Over two million people and sages attend this festival in Haridwar.  After six yaers, the Ardh Kumbh Mela is held at the six year interval, which is a much smaller festival.  Other sacred bathing places include Neel Dhara at the main branch of the Ganges, and Gourikund, which is a small holy well. 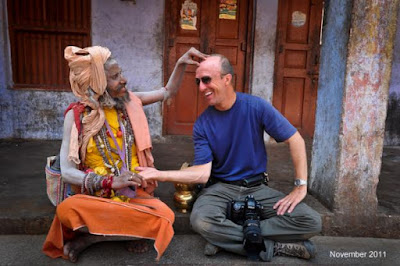 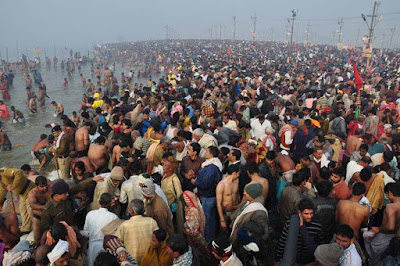 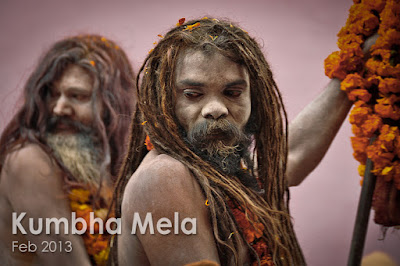 To know more details about Kumbha Mela 2013 held at Allahabad, kindly visit the blog as given below:

Heading south from Har-ki-Pauri along the Ganges we shall reach Gau-Ghat, where it is said that bathers can be purified of sins, even up to the killing and eating of a cow.  Vishnu Ghat marks the spot where Lord Vishnu once bathed.  About a half kilometer south of Har-ki-Pauri is Kushavarta Ghat, where Dattatreya did penance many years ago by standing on one leg for a thousand years.

About half a kilometer upstream from Har-ki-Pauri is Bhimagoda Kund.  This is said to have been created by a blow from the knee of Bhima, one of the five Pandavas, when he needed to provide water for his wife and brothers.  Nearby is where we will go to get a riksha to Rishikesh, unless we take bus. 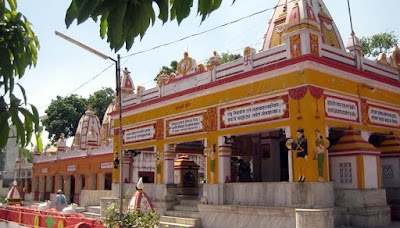 About six km North of Haridwar on the banks of the Ganges is Sapta Rishi Ashram where Ganges divided itself and created seven small islands so it would not displease the Seven Rishis who were meditating there at the time. 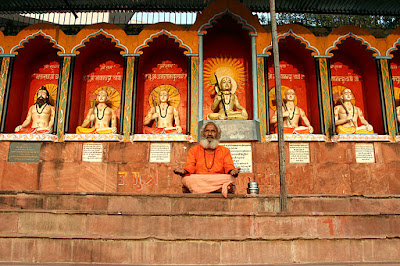 Haridwar is known for having many ashramas and places of study.  But if you want to stay at an ashrama to study yoga or Hinduism, Rishikesh is much more pleasant.  Haridwar is a nice place to visit to see the temples and holy sites but parts of it are like a typical big, noisy and congested city.