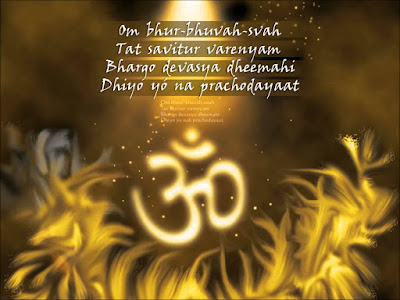 The second point, it should have only 23 letters and not 24 letters.  Therefore, tatsaviturvarenyam should be chanted and not tatsaviturvareniyam.  If ni yam  are separated, it is gayatri chandah and ni and yam are combined nyam - it is nichrd gayatrichandah.  Ekasara vihina tu nichard gayatrichandamuchyate.  This nichrd gayatri is used for pranayama arghyam danam and japa.  The other gayatri with 24 letters is supposed to be used for homa, etc.,

The third point with regard to japa is being pointed out.  Japa is supposed to be of three types -
1. Ucca Japah [2] Manda japah [3] Manasam japah

[1]  Ucca japah is a chanting, which is loud and audible to the people around.  Sometimes it is audible and often times it is disturbing to others, if they are engaged in some other vyavahara.

[2]  Manda or upamsu japah is chanting with the lip movement and which is audible only to the chanting person.  It is not audible to the people around, like a murmur, murmuring chant with the lip and the tongue movement.

[3]  Manasam japah where lip movement, tongue movement and even throat movement is not there. It is purely and totally mental chanting.

Of these three, which one is to be adopted?  All the three can be adopted but there is a gradation. The gradation is described in this manner -

"The best is mental japa, mediocre is murmuring, the lowest is said to be loud japa, and this is applicable to all forms of chanting."

It is not for Gayatri mantra alone, sarva mantresu vai dvijah, it is applicable to all chanting.  Of the three, mental chanting has got the greatest value.  In terms of punya - if loud chanting has got one unit of punya, upamsu japa, murmuring has got ten unis and manasam japa hundred times the benefit.  Of course manasa japa is difficult, because you cannot be that mechanical in manasa japa, whereas in vacika japa mouth can go on chanting and mind can go on worrying.

Some people hold on to the 'poonoal/yajnopavittam' (the sacred thread) and do all vyavahara! Gayatri will be on but other thoughts like 'Who has come?'  'What does he want?'  'What is the phone call?'  'What is the message?'  Recently I read somewhere that one should not hold on to sacred thread while chanting. We are supposed to use the hand for counting.   This is an incidental point. We can become mechanical in the chanting if it is louder; whereas if it is mental one has to involve oneself.  Therefore, it is going to be difficult and hence the punyam is more.  What is more difficult will give more punyam and what is less difficult will give less punyam.  But if a person is not able to do manasa japa, the only way out is to start with ucha japah and gradually come to manda japah and gradually proceed to manasa japah.  This is ideal for most of the people.

During the japa one cannot think of the deity (visualize) not only with respect of gayatri, it is with respect to any japa.  The imagination of the deity is only before the mantra chanting during invocation.  If during japa one (visualizes) imagines the deity, either the japa will become mechanical or imagination will become impossible.  Therefore, deity visualization is only before the japa and later the concentration is only on the mantra.

Concentration on the mantra 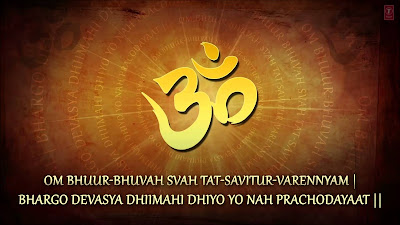 The meaning of  Gayatri mantra

When we chant the gayatri, we are adding two portions, the pranava and the vyahrti.  Om is called pranava manatra which is not a part of gayatri.  Bhurbhuvah suvah is vyahrti mantra which is also not a part of gayatri  They are appended.  Then what is actual gayatri?   The three lines - tatsavitruvarenyam, bhargo devasya dhimahi, dhiyo yo nah pracodayat.  We will see the meaning part by part. 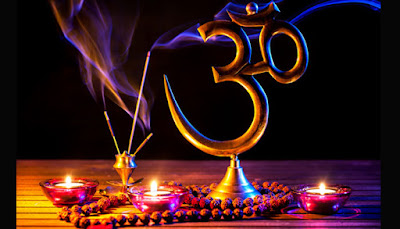 The first part is Pranava Omkara

Omkara  is a very much glorified in the scriptures and it is said that irrespective of the meaning of the omkara, the very sound 'Om' is a purifying mantra.

It is said that Brahmaji initiated this creation after uttering the two words 'om' and 'atha', therefore they are mangalam because of the sound and whatever be the meaning. 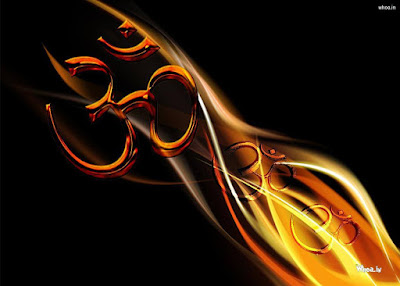 Omkara is supposed to be the best name of the Lord.  Lord has got so many names but the best name of the Lord is supposed to be 'Om'.  It is said in the Gita 'om tatsaditi nirdesah brahmanastrividha smrtah' [17.23],    Om tat and sat  -- these three are the names of Brahma or the Lord.  Because of this alone Omkara is known by the name pranavah.  Pranavah means a name which is ideal for the Lord.  'prakarsena nuyate brahma abhidhiyate anena iti pranavah 'om' - by which word Brahman is well understood and that name is called 'pranavam'.  Why Omkara is the ideal name?  Many reasons can be given but we will point out two reasons.

One is Omkarah is ekasharam.  It is one syllable word and Lord is also one - 'Omkarah ekah brahma ekam'.  Omkarah is aksarah, syllable and Brahman is aksaram, the imperishable one.  In addition to this there are philosophical significances which we find in Mandukya Upanisad.  Omkara is he ideal name for the Lord and therefore by uttering this we remember the Lord.

The word Omkara is derived from the root 'av raksane' 'avati raksati iti om.'  The one who protests is called 'om'.  It is applicable to the mantra and also to the Lord.  'padam api raksati padarthah isvarah api raksati'.

The Second part is Vyahrti mantra

Vyahrti mantra is also supposed to be auspicious irrespective of its meaning and because of the sound it is supposed to be very sacred.  By the very uccaranam, the sound purifies and that is why it is called vyahritih.  There are different definitions given for vyarti.

2.  'visesena asmantat harati papani iti vyahrtih'  papan apaharati that which removes all the papa when it is uttered.  It is a purifier so it is uttered before beginning the rituals.

Meaning wise bhu bhuvah and suvah represent the three lokas which are the manifestations of the Lord.   The simple meaning is - I remember 'om' the Lord who manifests in the form of the three lokas.

This is the meaning of om bhur buvah suvah.

I remmber the nirguna brahma who alone is manifesting in the form of saguna brahma - saguna visva virat, saguna taijasa hiranyagarbha, saguna prajna isvara that Lord I remember.  This is the philossophical meaning of the pranava and the vyahriti.

The third part is gayatri mantrah

The samanya artah is explained first for the general public.  Then the visesa vedanta artah is being explained.

The samanya arthah is invocation of surya devata.  According to the meaning is "yam mam dhiyam pracodayat savituh devasya tat varenyam bhargah dhimahi".  dhimahi means we meditate upon.  Meditate upon what?  varenyam bhargah means, sacred, auspicious, adorable, srestah bhargah, brilliance, effulgence.  We meditate upon that most effulgent or light of whom?  Devasya savituh, of the Lord Sun, surya devasya tejah dhyayamah; dhimahi dhyayomah.  In What way is it sacred?  nah dhiyah pracodayat - which effulgence alone, which energy alone, which light alone pracodayat means enlivens, energizes, activates, prerayapti - which sunlight that energizes dhiyah, our buddhi, our intellect.  So, the simple running meaning of the gayatri is - we meditate upon the sacred effulgence of Sun God which activates our intellect.  The explanation for this in the Gita [Chapter 15.12]:-

Bhagavan says 'Oh Arjuna.  The light and energy in the Sun belongs to me".

Therefore, you look upon this sunlight in the early morning as the pratyaksa symbol of the Lord because Lord Krishna says "I am in the Sun as the light", there I can worship the Lord.  How much of the glory is there?

"May Lord Agni, Lord Indra, Lord Surya, bless me with intelligence, continuity of progeny and radiance born of  Vedic study, prowess and splendor."

Most of the brahmachari prayers seek medha and prajna.  Gayatri is primarily a prayer or brahmacari, a vedic student.  This world 'brahmachari'  does denote an unmarried person.  Brahmacari means a vedic student and for him memory etc., is required 'yo nah dhivya pracodayat' may the Sun God bless me.  "Bless me" is not explicitly said, it is a mantra or statement, it is indirectly asked for.  This is the samanya arthah of Gayatri.

How do arrive at the meaning?  We will analyze one by one.

'devasya' means that which is effulgent cetana svarupam, cetanatmakkam, the intelligent principle.  By using the word devasya, the Lord is supposed to be the intelligent cause of the creation also - nimitta karanasya.

This is such a short statement but the Sanskrit commentators go crazy with this.  They hae written umpteen numbers of vykhyanams  including Sankaracarya.

Bhargah means that which is light, effulgent capable of removing darkness.  It is derived from the root bhrg dahe - bharjate to burn down, to roast, to fry etc.  This indicates the caitanya svarupam because caitanyam alone devara andhakaram nasayati, andhakaram bharjate, samsaram bharjate.  We have both the meanings now.  That which is effulgent and that which destroys ignorance through vritti, vrittyarudham tat.  By way of removing darkness, ignorance, it removes samsara also.  Thus bhargah stands for the awareness, caitanyam, cit svarupam.

The third words is varenyam.  Literally varenyam means that which is worth choosing by all - varaniyam varana yogyam.  What is that, which is chosen by all?  Can you say money?  Position? On Vedantic analysis we say, in and through everything everybody chooses one thing anandah and purnatvam, fulfilment.  Thus, there is only one purusartha, varaniyam purusartha, there is only one and that is anandah.  Therefore, varenyam means ananda svarupam.

There is also grammatical beauty here - starting with neuter gender word - Brahman, the mantra lands in a masculine gender word - atma.  Yah is masculine which refers to atma, tat is neuter which refers to Brahman.  That Brahman, which is saccidananda svarupam and is the jagat karanam, that Brahman since as atma by illumining the buddhi.  so, the yah, which caitanya svarupam, nah dhiyah, our intellect, or to be precise buddhi vrittih - (dhiyah, dhiyau, dhiyah - dvitiya bahuvacanam), all our thoughts pracodayat, illumine satta sphurti prahanena, by giving both satta and sphurti.

We meditate upon the atma caitanyam which is nothing but brahma caitanyam - prajnanam brahma.  This idea is contained in the famous Tattirya mantra sa yascayam puruse yascavaditye sa ekah"

This is the Gayatri mantra from Vedantic stand point.

If a person chants Gayatri before the study of Vedanta it becomes upasanam.  But the very same Gayatri after the study of the Vedanta becomes nididhyasanam - aham brahma asmi dhyanam. Gayatri visesa arthah sampatah  with this.

The meaning of smarta Gayatri.

This is the smarta Gayatri which is the same as the well known srauta Gayatri.  The only difference is - the Vedic Gayatri has got three lines "tat savittur varenyam, bhargo devasya dhimahi, dhiyo yo nah pracodayat".

What is the meaning?

What type of intellect?

Tat upsamahe - I meditate upon that holy sunlight.

Savita dharmadi gocarah prerayet.  "We meditate upon the sacred effulgence of that Sun God who activates our dharmic buddhi.

The smarta Gayatri is a holy Gayatri.  The greatest advantage is that you do not require any sacred thread, there is no differentiation of male or female or young or old or Hindu or Christian, or Islam or devah or asura.  It is janata Gayatri, Universal Gayatri, left and right you can initiate every one.  Even children can be initiated.  Choose an auspicious day, ask them to take bath, let them go to a temple, you can tie a yellow coloured thread in the right wrist, the father or mother or any elder can initiate the child and the child can regularly chant this, a minimum of 11 times and any number of times.