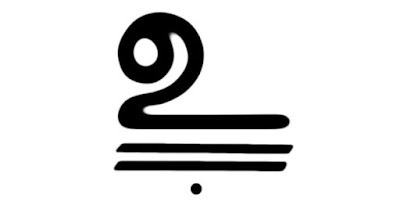 In Tamil Nadu, Pillayar suzhi or Ganesha circle is drawn first before writing anything on paper. It is comprised of a circle, a curve, two lines and a dot.  Perhaps in earlier times, when there was no paper, scribes used palm leaves to write on.  Before they started writing, they checked the quality of leaf by making a circle, a curve, a line and a dot. 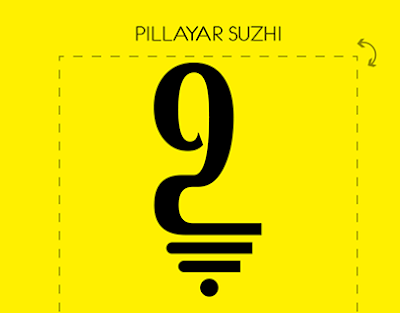 This came to symbolize Ganesha, the scribe who helped Vyasa write down the Mahabharata.  Since then the Pillayar Suzhi is supposed to make things auspicious and bring good luck.  In examinations, students draw this symbol at the beginning of their answer paper in the hope that the examinations go well. 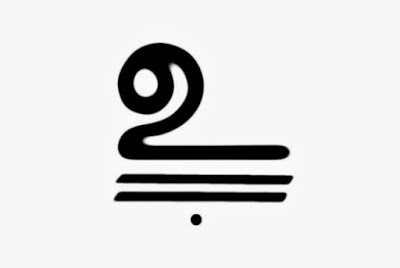 The 'pillayar suzhi' as shown in the above picture, contains all the basic shapes necessary to write down any letter in Tamil.  Namely, straight lines and curves.  Additionally people also add a dot in the bottom.

This helped people identify good pal leaves to write on.  The ones on which they couldn't draw the 'pillayar suzhi' comfortably were discarded.  This habit persisted and is still followed as a tradition albeit without any particular use. 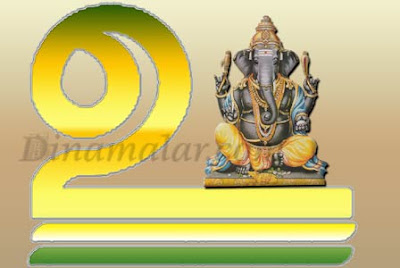 This is the prayer. 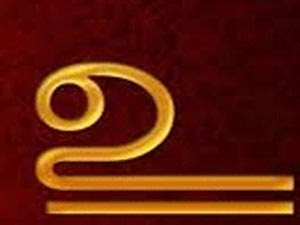 In Pillyar suzhi , the Tamil Letter உ – begins with small circle, then semi circle expands and end with straight line. 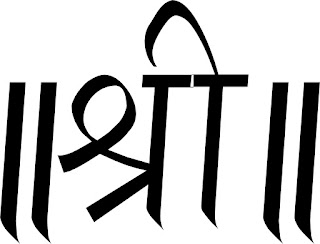 This Pillayar Suzhi in Tamil Nadu serves the same functions as the mark of SHRI in North India.  Shri is also said to be another name for Ganesha.  By writing his name in the beginning, one is heralding auspiciousness and ensuring absence of obstacles in any activity. 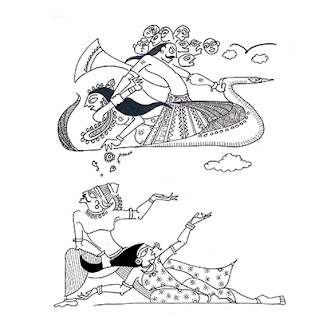 Sita and Draupadi are the two great heroines of India and they are as different from each other as the Ramayana is from the Mahabharata.  A comparison of these two legendary female characters reveals to us much about human personality as it does about human society.

Both Sita and Draupadi are princes.  Both have unnatural or supernatural births.  But while Sita is born of earth.  Draupadi of fire.

Sita's father Janaka, King of Videha finds her accidentally while he is ploughing a field and decides to adopt her.  Sita also addressed as her father's name Jnaka's Janaki.  Janaki is another name of Sita.

Draupadi's father Drupada, king of Panchala, creates her with the sole purpose of destroying the Kuru household that patronized Drona, who used his students, the Pandavas and the Kauravas, to conquer and then divide Panchala.

Thus while Sita is born an infant.  Draupadi is born an adult, with no appreciation of childhood or parenting.

And while Sita is raised in love.  Draupadi is raised in hatred, designed for destroying a family. Curiously, mothers play little or no role in their upbringing.  They are always addressed as their father's daughters.  Janaka's Janaki and Drupada's Draupadi. 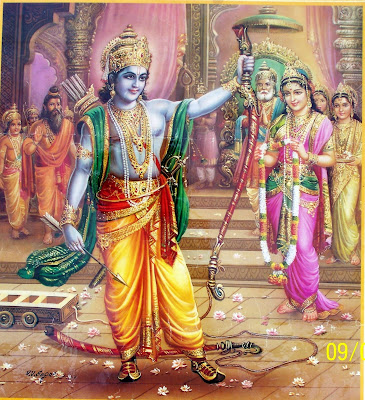 Both Sita and Draupadi are trophies in an archery contest.  Ram breaks a mighty bow that he was supposed to string to win Sita's hand while Arjuna strikes the eye of a fish rotating on a wheel hanging from the ceiling to win Draupadi's hand. 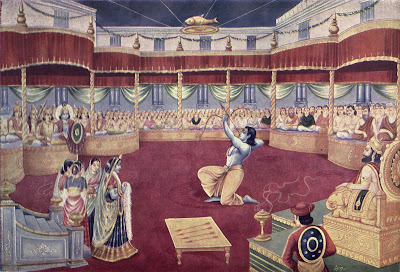 Some Ramayana retellings tels us of how Sita met Ram in a garden before marriage and it was love at her first sight, there is no such romance in Draupadi's life.  In fact, she prevents Karna from participating in the archery contest as he is of low caste and ends up marrying a brahmin who turns out to be Arjuna disguised.

Sita's sister and cousins are given in marriage to Ram's brothers.  Draupadi is shared by Arjuna's four brothers, all of whom have many other wives.  Thus, while Sita experiences monogomy, Draupadi experiences polyandry and polygamy.

Sita pays dearly for the actions of her husband and brother-in-law.  She is abducted by the Rakshasa-king, Ravana, on grounds that her husband had mutilated his sister Surpankha.

Draupadi pays disproportionately for her own actions.  She insults her husbands' cousin Duryodhana, the eldest Kaurava, when he falls in a pool of water calling him the blind son of a blind man, not realizing how oversensitive he was.  As a result Duryodhana goes out of her way to publicly humiliate her, getting her husbands to wage her in a gambling match and having lost her, watch helplessly while he gets her dragged in front of in full of the court and proceeds to disrobe her.

Both Sita and Draupadi are feared by their abusers.  Ravan fears forcing himself on Sita as there is talk of him losing his life if he touches an unwilling chaste woman.  Duryodhana's father, the blind Dhirtarashtra, warned by Vidura, gives back to the Pandavas all that they have lost to the Kauravas in the gambling match when he hears Draupadi swear that she will not tie her hair until she washes it with the blood of her abusers.

Sita never screams vengeance but displays silent stoic confidence that her husband will rescue her.  Draupadi Screams vengeance but doubts if her five husband will avenge her insult.  She has reason to doubt them.  They do not kill Jayadharata, the husband of her sister-in-law, even though he drags her out of her house onto his chariot determined to make her his concubine.  They hesitate to kill Kichaka for fear of making their secret identities public when he abuses her in the final year of their exile when they all live as servants in the palace of king Virata.

When Ram finally rescues Sita, he reveals rather heartlessly that he is more worried about his family honor, and not her person, forcing her to prove her chastity while in captivity in Ravana's house by undergoing a trial by fire.  There is never talk of Draupadi's chastity;but that she has five husbands often leads to accusations that she is public woman and not a queen.

In the final chapter, Sita is abandoned in the forest, banished from her husband's house as the public feels she is stain on royal reputation and unfit to be queen.  She suffers silently.  Ram however, never remarries, thus declaring his love for her.  Draupadi gets her vengeance; her abusers are massacred and she washes her hair in their blood.  But the joy of vengeance is short-lived. 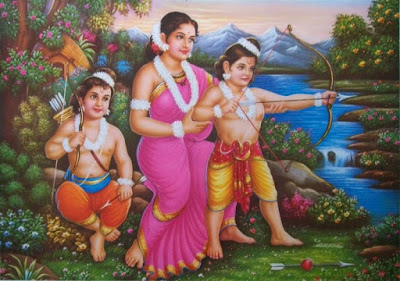 Sita  gets the pleasure of raising her children and they do inherit Ram's kingdom.  Draupadi, however, does not get the pleasure of raising her children; they are sent to the house of Krishna while she lives in exile in the forest with her husbands.  All five are murdered by Drona's son who refuses to take defeat lying down.  The kingdom of the Pandavas is passed on to the grandson of one of Arjuna's other wives.

When Sita finally disappears under the earth refusing to rejoin her husband on his throne.  Ram weeps and decides he cannot live on earth without her.  He enters the river Sarayu and does not rise again.  Draupadi; by contrast, dies a lonely death when she slips and falls down the slopes of the Himalayas; not one of her five husbands come to her rescue as her first husband, Yudhishtira, feels that having renounced the world they have to let go of all bondage.

Both Sita and Draupadi are enshrined as Goddesses.  Sita is more familiar sight in temples.  She is the graceful Lakshmi, without whom Ram is never worshipped.  Draupadi worship is popular in some parts of India as in North Tamil Nadu.  There she is Amman, the mother-goddess, worshipped alone without any of her husbands, the fearsome Kali who drinks blood of her abusers.

It is interesting to note that modern writers tend to project Sita more as a silent suffering victim and Draupadi more as a outspoken demanding heroine while traditional story tellers saw Sita as a person full of love, wisdom and patience and Draupadi as a glamorous intimidating diva.  What everyone agrees with is that there can be no two characters more different from each other.